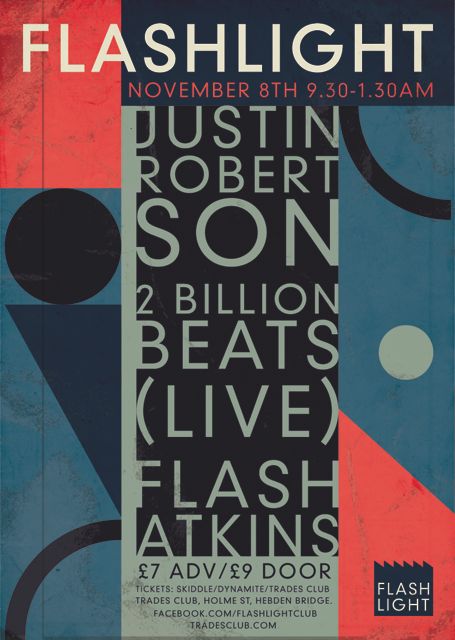 Flashlight is back to once again tear the roof off the Trades Club and this time there’s a bona fide acid house legend behind the 1s and 2s along with one of the hottest live acts in the UK.

Justin Robertson started playing at the seminal Manchester club Most Excellent in the late 80s and has remained one of the UK’s most relevant and exciting DJs . Something to which a whole new generation of electronic artists like Daniel Avery and clubbers will testify. Justin’s stock has continued to rise with headline sets at Bestival, Unknown, Festival No 6, Electric Elephant and The Warehouse Project and his blend of techno, house and curveballs are guaranteed to bring the party.

2 Billion Beats have been making a name for themselves on Paper Recordings with their synth heavy 80s disco inspired house music. Now hitting the live circuit they are one of the only acts around today capable of hitting a club night mid-mahem and taking it up a notch or two. With an album out next year set to bring the limelight, catch them on the way up.

Resident Flash Atkins and Hebden’s failing super hero will getting it started with a good serving of the deep stuff.