Håkan Lidbo, mighty Swedish producer of all things electronic is back on with a four track EP that ranges from deep house to techno via some heavy rock landing bang slap in the middle of the dancefloor.

First up, ‘Let’s Rock’ takes the two opposite extremes of heavy rock and techno, mashing them together producing a glitchy head banging classic destined for peak time status in your more eclectic DJ’s sets.

Next up ‘Honey Dipping’ takes things bumpier with some futuristic vocoder tinged deep house that comes across effortlessly as Daft Punk with a swing.

Sug Min Puss sounds like a bee stuck in a jar but with a 4/4 beat and big distorted bottom end that gets locked into a groove that builds up the pressure relentlessly. Magik Johnson demanded to remix this, so keep ‘em peeled for his take later in the year as those Kiwi festivals were lapping it up during their antipodean summer.

Finally, Groove On goes old school with a 909 kit and rave synth straight from ’91. Aciiieeeeed! 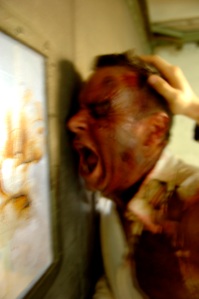 After weeks of deliberation, Depeche Mode have finally chosen a winner for their ‘Peace’ remix contest. Over 1000 producers entered the Beatport-sponsored remix contest, and over 51,000 votes were cast by the public making it the biggest remix competition ever held on Beatportal.

Hi name is our very own Håkan Lidbo!

Altogether the band received 20 remixes, 10 chosen by the public via a vote, and 10 chosen by Beatport’s judges (who listened to, and debated each and every remix).

Depeche Mode then listened to and scrutinized each of the 20 remixes, and spent many days deciding which mix would be crowned their eventual winner.

In the end, they found their champion.

Prolific Swedish electronic producer and true gent Håkan Lidbo’s, XX_XY is electronic, synth driven pop music that asks a question that has been missing in today’s pop climate… are men are actually necessary in the future?! Get it now exclusively on Beatport.

Håkan’s own remix is straight up house designed for rocking floors and feet with a massive riff and the full vocal; whereas Zed Bias shows why he has been at the cutting edge of urban music for the last ten years by touching on breaks, dubstep and garage with a deep throbbing bass pinned down by a tough break and vocals.